At Home in Heaven – ‘For ever with the Lord’

James Montgomery, the writer of the wonderful piece of poetry, later to become the very well-known hymn – For ever with the Lord – had a most interesting life. Apart from anything else he was someone with a tender social conscience, and someone who was not afraid to challenge authority. Perhaps, in the future we may do a biographical article about him. Although he wrote quite a number of poems about topical issues of the day, including things like slavery, it is perhaps for his so-called Christian verse that he is better known. This particular offering from Montgomery’s pen appears in ‘A Poet’s Portfolio – or Minor Poems’, published in 1835, and again in 1853 in a work entitled ‘Original Hymns for Public, Private, and Social Devotions’, a publication that was re-issued in an edited edition in 1907.

As originally written the poem had two parts, and twenty-two verses. Readers of this small article will recognise that the modern version which appears in a number of our hymn books, including ours at Crich, has quite a few of the original verses that have been omitted. The hymn was, I believe, sung at the funeral service of Charles Haddon Spurgeon, the popular Victorian preacher, pastor of the Metropolitan Tabernacle, who died in 1892.

At Home in Heaven (“For ever with the Lord”)

“FOR ever with the Lord!”
—Amen; so let it be;
Life from the dead is in that word,
’Tis immortality.

Here in the body pent,
Absent from Him I roam;
Yet nightly pitch my moving tent
A day’s march nearer home.

My Father’s house on high,
Home of my soul, how near,
At times, to faith’s foreseeing eye,
Thy golden gates appear!

Ah! then my spirit faints
To reach the land I love,
The bright inheritance of saints,
Jerusalem above.

Yet clouds will intervene,
And all my prospect flies;
Like Noah’s dove, I flit between
Rough seas and stormy skies.

Anon the clouds dispart,
The winds and waters cease,
While sweetly o’er my gladden’d heart
Expands the bow of peace.

Beneath its glowing arch,
Along the hallow’d ground,
I see cherubic armies march,
A camp of fire around.

I hear at morn and even,
At noon and midnight hour,
The choral harmonies of heaven
Earth’s Babel-tongues o’erpower.

Then, then I feel that He,
(Remember’d or forgot,)
The Lord, is never far from me,
Though I perceive Him not.

IN darkness as in light
Hidden alike from view,
I sleep, I wake within His sight
Who looks all nature through.

From the dim hour of birth,
Through every changing state
Of mortal pilgrimage on earth,
Till its appointed date;

All that I am, have been,
All that I yet may be,
He sees at once, as He hath seen
And shall for ever see.

How can I meet His eyes?
Mine on the cross I cast,
And own my life a Saviour’s prize,
Mercy from first to last.

“For ever with the Lord!”
—Father, if ’tis Thy will,
The promise of that faithful word,
Even here to me fulfil.

Be Thou at my right hand,
Then can I never fail;
Uphold Thou me, and I shall stand,
Fight, and I must prevail.

So when my latest breath
Shall rend the veil in twain,
By death I shall escape from death,
And life eternal gain.

Knowing as I am known,
How shall I love that word,
And oft repeat before the throne,
“For ever with the Lord!”

Then, though the soul enjoy
Communion high and sweet,
While worms this body must destroy,
Both shall in glory meet.

The trump of final doom
Will speak the self-same word,
And Heaven’s voice thunder through the tomb,
“For ever with the Lord!”

The tomb shall echo deep
That death-awakening sound;
The saints shall hear it in their sleep
And answer from the ground.

Then, upward as they fly,
That resurrection-word
Shall be their shout of victory,
“For ever with the Lord!”

The resurrection-word,
That shout of victory,
Once more,—“For ever with the Lord!”
Amen; so let it be.

(The site from which this video is taken, is provided on YouTube, by a Christian from the Netherlands, Martijn De Groot. He has a good selection of congregational hymn singing, not only from the Metropolitan Tabernacle, in London, but also hymns from Grace Community Church, in Sun Valley, CA, USA, and Westminster Chapel, London, during the time of Martin Lloyd-Jones pastorate.) 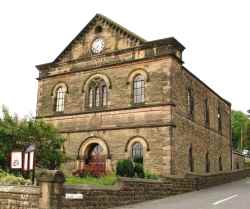